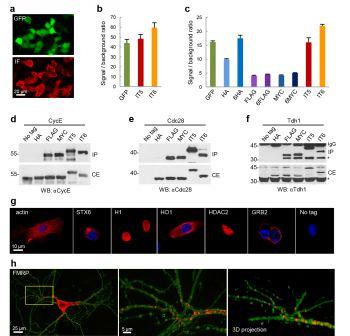 A study conducted in collaboration with the CSIC, BSC and UB provides a new approach to follow cellular proteins more closely.

The target proteins labelled with inntags do not show detectable alterations of function or localization.

A study performed in Barcelona has revealed a new method for protein tagging that preserves protein native functions and structure. The study, published today at Nature Methods (the most prestigious journal for the presentation of results in methods development), proposes the use of two plant protein epitopes, namedinntags, as the most innocuous and stable tagging tools in the study of physical and functional interactions of proteins.

Proteins and peptides of various sizes and shapes have been used since the early 80s to tag proteins with many different purposes, ranging from affinity purification to fluorescence-based microscopic detection in whole organisms. However, tagging strategies used nowadays run the risk that the native function of the protein may be abolished or compromised by interactions with the tag.

A study leaded by the Molecular Biology Institute of Barcelona and the Joint Programme for Computational Biology of the Institute for Research in Biomedicine (IRB Barcelona) and the Barcelona Supercomputing Center, and University of Barcelona, has analyzed the available list of polypeptides with known 3D structure to identify among them the most suitable for tagging purposes. Researches have selected the smallest protein domains that still display strong structural determinants to act as antigens, do not generate solubility issues, do not compromise cell fitness and cause no detectable functional and localization effects when fused to other target proteins.

A large series of bioinformatics tools were first used to scan through the entire planet proteome to select those proteins which could, in principle, have good tagging properties. After manual curation of the in silicoresults 12 tag candidates were tested in vivo, finding excellent or outstanding properties for all of them.Inntags maintain their integrity, stability, solubility in cell extracts, diffusional mobility and do not cause important functional perturbations that commonly used tags -such as MYC, FLAG or HA- do cause. Moreover, the tests have shown the applicability of Allergen Phl p2 and Heiven Isoform 2 in immunofluorescence and immunoprecipitation analysis of a series of proteins in mouse fibroblasts and hippocampal neurons.

As they are clearly more innocuous compared to commonly used tags, inntags may be the tools of choice to perform proteome-wide interactome studies, in situ analysis of proteins at the single-molecule level or when the target protein does not offer an obvious functional assay. The developed technology will open new possibilities for researchers in cellular biology, as they will provide them a neater, unbiased method to track proteins inside the cell.

The study has been led by Martí Aldea and Carme Gallego, Molecular Biology Institute of Barcelona (IBMB), CSIC, Barcelona, Catalonia, and Modesto Orozco, group leader at the IRB Barcelona, professor at the UB and director of Life Sciences departament at the BSC, Antibody BCN, Ltd, Immunostep Ltd, and Zagazig University have also contributed to this work.